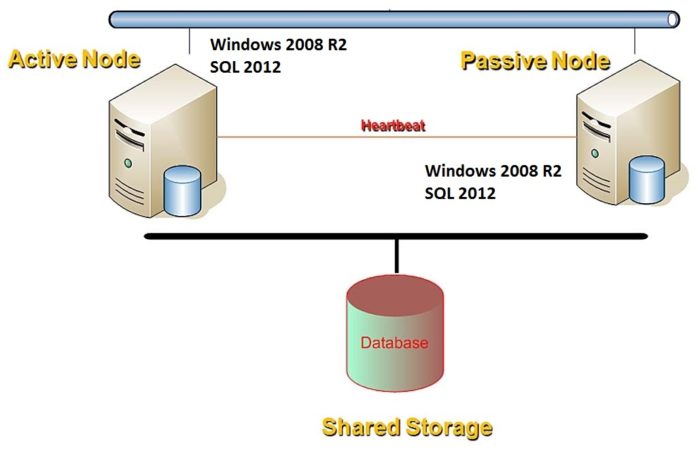 Today I am writing a Blog Series on one of my Favorite topic – SQL Server Cluster.  This will include all the possible Questionnaire which are asked in the Interviews related to Cluster.

1) What is Windows Cluster?

Clustering can be best described as a technology that automatically allows one physical server to take over the tasks and responsibilities of another physical server that has failed. The obvious goal behind this, given that all computer hardware and software will eventually fail, is to ensure that users running mission-critical applications will have very less downtime when such a failure occurs.

A cluster node is a server within the cluster, and it has Windows Server and the Cluster service installed.

3) What is Cluster Service?

4) What is called a Resource in Windows cluster?

A resource is a physical or logical entity, which has below properties:

To manage resources, Cluster service communicates with a resource DLL through Resource Monitor.

5) What are the different states of a Resource in Windows cluster?

All resources can have following states

6) What is a Cluster Group?

Conceptually, a cluster group is a collection of logically grouped cluster resources. It may contain cluster-aware application services, such as SQL Server Group, File Server.

7) What is Public Network?

8) What is Private Network?

A private network (sometimes called as interconnect or heartbeat connect) is a network that is setup between the nodes of the cluster and it carries only internal cluster communications.

9) What is Heartbeat in Windows cluster?

10) What Failover and Failback terms mean in Windows Cluster?

Failover: Failover is the process of moving a group of resources from one node to another in the case of a failure. For example, in a cluster where Microsoft SQL Server is running on node A and node A fails, SQL Server automatically fails over to node B of the cluster.

Failback: Failback is the process of returning a resource or group of resources to the node on which it was running before it failed over. For example, when node A comes back online, SQL Server can fail back from node B to node A.

This is a logical drive assigned on the shared disk array specifically for Windows Clustering. Clustering services write constantly on this drive about the state of the cluster. Corruption or failure of this drive can fail the entire cluster setup. It also acts as a voter in the fail over process in case of odd number of nodes.

13) What is Node Majority model?

This type of quorum is optimal for clusters having an odd number of nodes. In this configuration, only the nodes have votes. The shared storage does not have a vote. A majority of votes are needed to operate the cluster.

14) What is Node and Disk Majority model?

This type of quorum is optimal for clusters having an even number of nodes when a shared witness disk is not an option. Other characteristics include the following:

16) What is No Majority: Disk only mode?

17) What I Split Brain situation in Cluster?

Cluster nodes communicate with each other over the network (port 3343). When nodes are unable to communicate with each other, they all assume the resources of the other (unreachable) nodes have to be brought online. Because the same resource will be brought online on multiple nodes at the same time, data corruption may occur. These results in a situation called “Split Brain.”

18) How Spilt Brain situation is resolved?

To prevent Split Brains we need to bring the cluster resource online on a single node (rather than multiple nodes).  Each of the online node cast vote for majority and the resources come online on that group which has more votes or has majority. In case of Even number of nodes Quorum also acts as a voter to eliminate split brain situation.

19) What are the Hardware requirements for Windows Server Cluster?

20) What are the Hardware requirements for SQL Server Cluster?

21) How many IP Addresses we require for setting up Active\Passive SQL Server cluster?

22) How many IP Addresses we require for setting up Active\Active SQL Server cluster with Analysis services?

23) How do you open a Cluster Administrator?

An Active – Passive cluster is a failover cluster configured in a way that only one cluster node is active at any given time. The other node, called as Passive node is always online but in an idle condition, waiting for a failure of the Active Node, upon which the Passive Node takes over the SQL Server Services and this becomes the Active Node, the previous Active Node now being a Passive Node.

An Active – Active cluster is a failover cluster configured in a way that both the cluster nodes are active at any given point of time. That is, one Instance of SQL Server is running on each of the nodes always; when one of the nodes has a failure, both the Instances run on the only one node until the failed node is brought up (after fixing the issue that caused the node failure). The instance is then failed over back to its designated node.

In sql2005 we have the option of installing SQL in remaining nodes from the primary node, But in sql2008 we need to go separately (Login to the both nodes) for installing SQL cluster

28) Can we change the Quorum settings after installing the windows cluster?

Yes, we can change the Quorum setting after the Windows Cluster installation.

29) Is it mandatory to configure MSDTC in Windows 2008 cluster before installing SQL Server cluster?

No it’s not mandatory to configure MSDTC service to install SQL Server in Windows 2008 cluster. Installation will give you a warning but will not stop the installation.

30) What are the Benefits of SQL Server Cluster?

31) What are the Drawbacks of SQL Server Cluster?

References: Thanks to the all the SQL Server techies who wrote and shared the valuable information in the below blogs which helped me a lot to prepare this series of Questions. Also big thanks to Microsoft Documentation which contains each and everything about their product.

How to Perform database restore with Database Encryption

How to use SQL Server Encryption to Secure data? 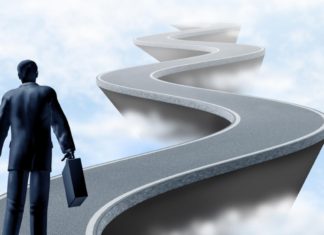 Editor - October 31, 2016
0
In today's unpredictable IT world, learning is not only a straightforward thing to do — it is key to the survival in the competition....

How to create Drop and Recreate Script of all Indexes in...

ABOUT US
We are a group of Professionals with strong aspirations who want to leverage this platform to share knowledge via our diverse technical experience in the database region. This is an initiative to serve the Database community by sharing blogs, best practices, scripts, day to day issues and their solutions, resume building, free training, events etc.
Contact us: [email protected]
FOLLOW US
© DBA MANTRA
MORE STORIES

Parvinder Pal - October 19, 2016
0
Skip to toolbar
We use cookies to ensure that we give you the best experience on our website. If you continue to use this site we will assume that you are happy with it.OkNo